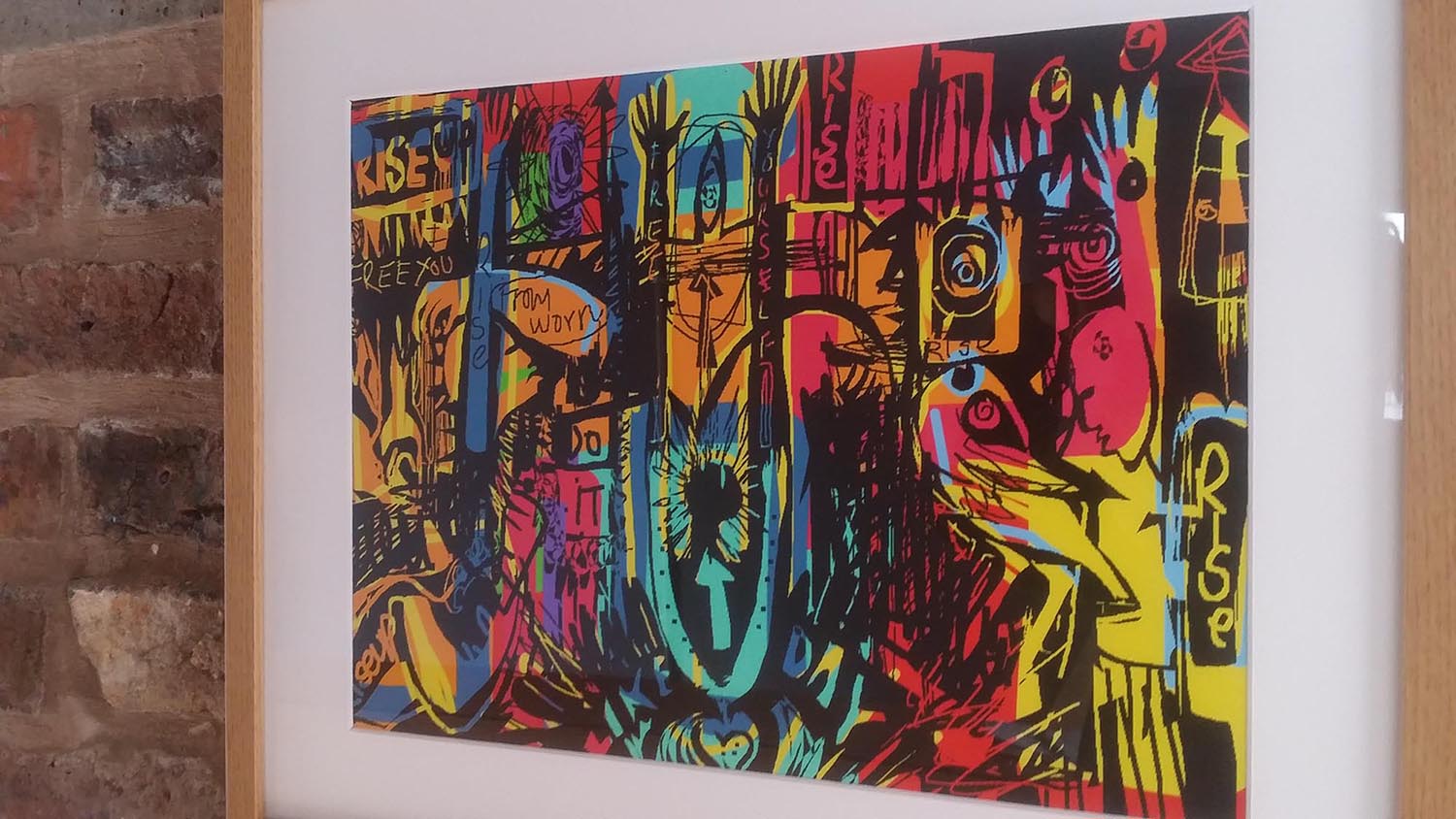 Rhythm: An exhibition of Akinyemi Oludele’s work is taking place at The Horsfall, Great Anocats Street, Manchester city centre, and runs until 22nd September 2018. There are three floors of works, approximately eighty exhibits in all. The work divides roughly into three types.

On the first floor are drawing of scenes featuring musicians, set in bars, clubs and music events. If Degas worked often behind scenes, painting ballet dancers and circus artistes as they warmed up, Akin works in front of the scene, the angle of perspective suggesting he is right there among the crowd, in front of the band. The predominant medium is charcoal on paper, and the works capture the musical movement, the rhythm and flow before him.

In these charcoal drawings, the distance in time and space between painter and the subject reduced close to zero, the artwork becoming a vibe translated in real time, and surviving long after the music stops. We don’t have the music when we view the pictures, but we feel it. Oludele eschews here any attempt at capturing likenesses.  This is not portraiture. While the figures are not anonymized, neither are they highly personified. This is the artist as a channelling medium, a shaman, working while under a form of possession, being carried away by the music or by the spirit that underscores the music.

One effect of the choice of charcoal markings for these works  is a substantial erasure of distinction between black and white bodies, a suggestion of the coming together of the entire population of Manchester under the groove of the musicians – all is synchronised silhouette. If the typical 18th  century painting scene might suggest by the richnesss of costume and the iconic presence of a globe and perhaps a horse or early piano that the subject is saying, this is who I am – see my wealth, my dominions, my power – then Oludele’s chiaroscuro-like charcoal drawings work in a similar manner: they say, this is what Manchester is, this is what we are about. We aspire, not to wealth and adornment, but to creative collaboration on an equal footing.  The work also suggests a sense of art as a communal act – the artist not separated from the people but among them, one of them.

On the ground floor of the Horsfall are predominantly Expressionist works.  If the Expressionist school was concerned with externalizing the mood and emotion within the artist, then it is necessarily a more intense and individual experience.  Most of these works are on artboard.  Some are small board works placed together in fours or threes: clusters of oblong panels, giving a feel of the panelling of church reredos or the triptychs around altar screens, or,  in the metaphor of music,  chords – different notes coming together to create a single effect.  These expressionist works are highly energised. The oil, acrylic, pastel and ink marks are applied and modified by scratchings, etchings, blottings, smoothing, palimpsest and blurrings, using implements that may have been sticks, needles, knives, feathers as well as the humble brush.  The energy of the line is more Basquiat than Kandinsky and there is often a verticality in the movement of the Work, an arrowing up. There are glimpses of the representational within these pieces: African features appear in the curve of a lip or the shape of a nose, but the general fluidity bypasses representation for mood and conjures up causeways, routes, journeys, diasporan energy: these works elevate movement, are anathema to stasis. 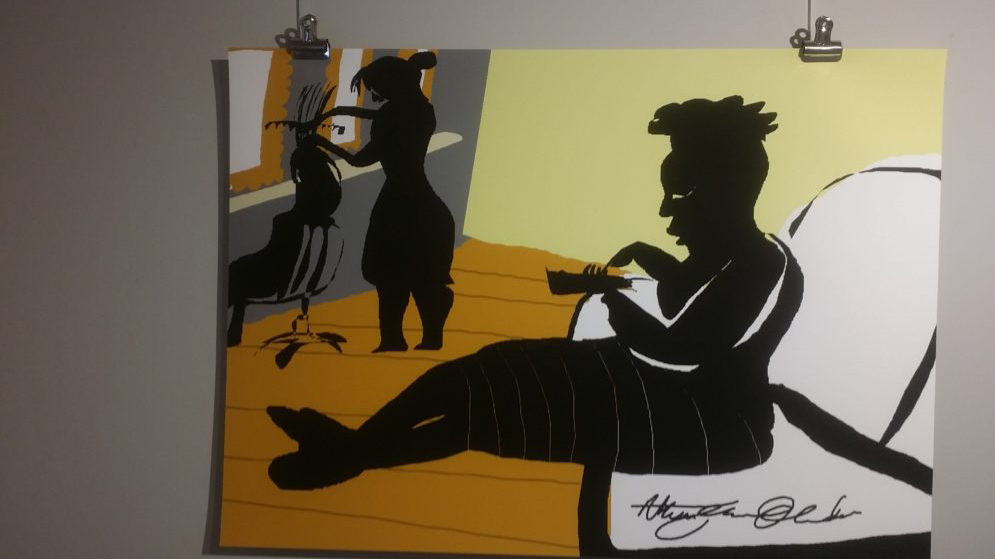 On the top floor are some Giclee prints.  Drawn (I assume) at a screen rather than on physical material, they are more sculpted pieces.  The work named ‘Salon’  shows women in a hair shop; we see the window light flooding in, the women inside,  the work on hair going on by the staff, a waiting customer on a mobile phone.  It is a highly recognisable slice of daily life image, yet not a prettification. It works well with the Giclee print in the same room, ‘Birth of Venus’ which reworks Botticelli’s image of the white, European woman stepping from a scallop shell. In Oludele’s version, this ideal of beauty is overthrown. ‘Band’ is another impressive Giclee print that, in its counterpointing of black and white, in the rhythm of the shapes made, perhaps echoes the playing of the base guitarist, trumpeter and keyboard musicians which it features. Its vibrant, confident colours, it daring angularity, the gelede mask shapes of the musicians’ faces, all come together in a sense of celebration, in veneration of spirits old and praise of spirits new.

The exhibition work  as a whole is testament to the hybridities, Africanities and fluidities of the music scene, and of the wider diverse communities of contemporary post-colonial Manchester, UK. It is well curated, the art smartly displayed in arrangements, contexts and juxtapositions that let each piece breathe.

Oludeles’s deep grasp of African and European aesthetic traditions, and his unique sensibility combine to produce a magnificent exhibition that announces the arrival of an artist of astonishing range and formidable talent.